Why Should You Have Your Dryer Vent Cleaned?

Home » Why Should You Have Your Dryer Vent Cleaned? 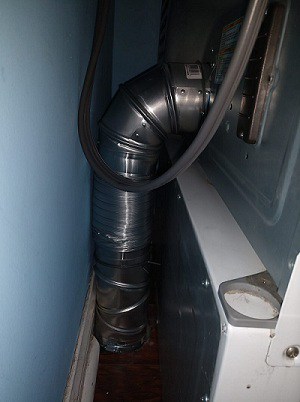 The long a dryer vent runs it will create many problems. First is the buildup of dryer lint. You can pull the lint screen from the dryer and see how tiny the holes are and you can get an idea of how lint can quickly build up.

When you dry your clothing, tiny fibers come off them then flow through your dryer, some of which get trapped in the lint screen. But, the lint screen only has the ability to catch around 40 – 60 percent of the lint, which leaves the remainder to flow out of your dryer and into its vent system.

Those small fiber particles begin to dry out as soon as they leave the clothes and once they are dry, float into the air system until they’re blown out of the house or land some place inside the vent, and usually bond with more lint.

With the moist, hot air from a dryer, this lint begins to collect at specific areas inside the vent and build-up, which forms air flow restrictions. Any reduction or restriction of airflow causes more lint to begin to gather inside the vent. So now it is possible to see the cycle of lint building up over a period of time.

As discussed earlier, the restriction of air flow that is caused by lint’s build-up is how a vent becomes clogged. When that occurs, the dryers begin working more diligently to get our clothes dry. We see this as the drying times slowly increase until we get accustomed to operating the dryer on a continuous basis just to get the laundry dry.

Lastly, with your dryer overheating, there can be one of two outcomes. Your dryer fails and must be repaired or lint becomes ignited. The latter of the two is the most feared by the majority of homeowners.

Therefore, cleaning the dryer vents should be a necessary task that gets done on an annual basis.

For more information on our dryer vent cleaning services please feel free to get in touch with King’s Cleaning Solutions in Kokomo IN at (765) 698-5096 right away!

Ready to schedule a cleaning?

Leave Us a Message

Fill out my online form.